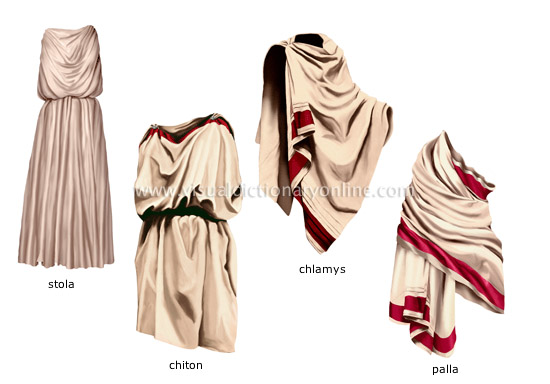 Ancient Greek clothing was typically homemade and the same piece of homespun fabric that was used as a type of garment, or blanket. From Greek vase paintings and sculptures, we can tell that the fabrics were intensely colored and usually decorated with intricate designs.

Clothing for women and men consisted of two main garments-a tunic (either a peplos or chiton) and a cloak (himation). The peplos was a large rectangle of heavy fabric, usually wool, folded over along the upper edge so that the over fold (apoptygma) would reach to the waist. It was placed around the body and fastened at the shoulders with a pin or brooch. There were armholes were on each side, and the open side of the garment was either left that way, or pinned or sewn to form a seam.

The chiton was made of a much lighter material, normally linen. It was a very long and very wide rectangle of fabric sewn up at the sides, pinned or sewn at the shoulders, and usually girded around the waist. Often the chiton was wide enough to allow for sleeves that were fastened along the upper arms with pins or buttons. Both the peplos and chiton were floor-length garments that were usually long enough to be pulled over the belt, creating a pouch known as a kolpos. Under either garment, a woman might have worn a soft band, known as a strophion, around the mid-section of the body.

Men in ancient Greece customarily wore a chiton similar to the one worn by women, but knee-length or shorter. An exomis (a short chiton fastened on the left shoulder) was worn for exercise, horse riding, or hard labor. The himation (cloak) worn by both women and men was essentially a rectangular piece of heavy fabric, either woolen or linen. It was draped diagonally over one shoulder or symmetrically over both shoulders, like a stole. 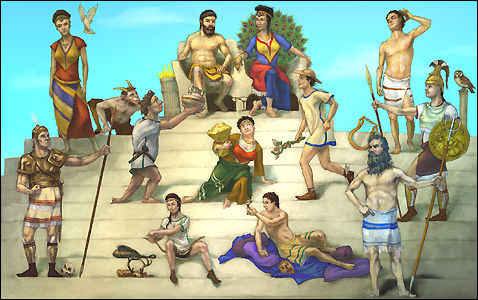 The Greeks worshiped twelve deities known as the Olympians. Click on the picture to learn more about each Olympian deity.

The ancient Greeks would pray on their feet, with their hands up to the sky while they were praising Zeus and the other heavenly gods.

Whenever they wanted to worship Hades, the King of the Underworld, or other deities of the underworld, they would kneel down to the earth, powerfully hitting the earth with their hands in order to be heard loudly.

In their prayers, the ancient Greeks asked for help and support from the god or the goddess they were referring to, reminding them of all the good deeds they had done for them. They offered goods such as wine, oil, milk, sweets and nuts and sacrificed the fat and bones of animals such as rams, ewes, cows, bulls and goats, depending on what they believed that their gods preferred.

According to some beliefs, it had even come to attempts of human sacrifices, in order to worship deities such as Hades or Artemis, the goddess of the hunt.

Would a god find out that a human did not praise him like he should, the punishment was usually heavy and oftentimes eternal, like in the case of Meropis, who was transformed by Athena, the goddess of wisdom, into an owl because of her impudence.

Offers and sacrifices were made also to the dead, to honor them and have their protection. The ancient Greeks believed that the dead lived in Hades (the Underworld) and enjoyed the offers from their relatives.

Men ran the government, and spent a great deal of their time away from home. When not involved in politics, the men spent time in the fields, overseeing or working the crops, sailing, hunting, in manufacturing or in trade. For fun, in addition to drinking parties, the men enjoyed wrestling, horseback riding, and the famous Olympic Games. When the men entertained their male friends, at the popular drinking parties, their wives and daughters were not allowed to attend. 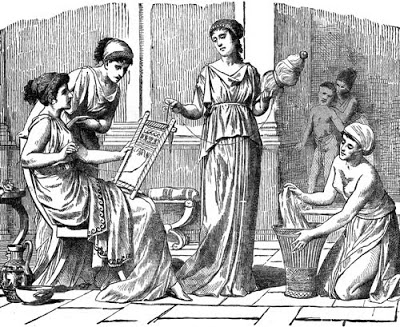 With the exception of ancient Sparta, Greek women had very limited freedom outside the home. They could attend weddings, funerals, some religious festivals, and could visit female neighbors for brief periods of time. In their home, Greek women were in charge. Their job was to run the house and to bear children.

Most Greek women did not do housework themselves. Most Greek households had slaves. Female slaves cooked, cleaned, and worked in the fields. Male slaves watched the door, to make sure no one came in when the man of the house was away, except for female neighbors, and acted as tutors to the young male children. Wives and daughters were not allowed to watch the Olympic Games as the participants in the games did not wear clothes. Chariot racing was the only game women could win, and only then if they owned the horse. If that horse won, they received the prize.

The ancient Greeks considered their children to be 'youths' until they reached the age of 30! When a child was born to ancient Greek family, a naked father carried his child, in a ritual dance, around the household. Friends and relatives sent gifts. The family decorated the doorway of their home with a wreath of olives (for a boy) or a wreath of wool (for a girl).

In Athens, as in most Greek city-states, with the exception of Sparta, girls stayed at home until they were married. Like their mother, they could attend certain festivals, funerals, and visit neighbors for brief periods of time. Their job was to help their mother, and to help in the fields, if necessary.

Ancient Greek children played with many toys, including rattles, little clay animals, horses on 4 wheels that could be pulled on a string, yo-yo's, and terra-cotta dolls.